All the Adidas Champions League official balls from 2001 until 2019

When someone says “Champions League”, I think of three things: the trophy won by Steaua Bucuresti in 1986, “Die meister, die besten, les grandes equipes, The Champions” official anthem, and last but not least, the ball with the stars. In fact, the “starball” logo created by Design Bridge for the Champions League branding is the source of inspiration for the official match ball.

Every year, Adidas enchants us with a ball design that balances the classic star-shaped print with a new color mix. I love so much the Champions League ball because it is the first replica I got as a kid.

You cannot imagine how cool you were in Romania if you owned “an original-like” football ball. Going from a rubber golf printed ball to a replica is like watching a live match at Nou Camp after streaming it on shady websites.

The ball I got is the Adidas Finale 2. You guess it, it’s the second ball designed by Adidas after the long-term partnership started in 2001.

Let me take you back in time and show all the Adidas Champions League balls. Pentagon panels are white and various colors and patterns are shaping the stars. This is the norm since Adidas started to supply the official... 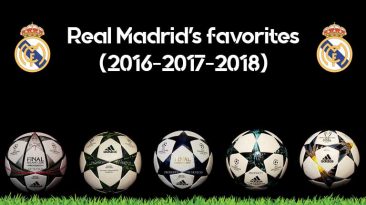 After one-year break when their all-time rivals grabbed the trophy, Real Madrid is back to restore full European dominance. The next 5 balls helped... The 2010 Madrid final introduces a new ball design and technology that takes the shape of the Champions League starball logo. The stars are now a... We know Paris as the city of lights. I’m not sure, but maybe this is the reason why Adidas chose a light red for its ball used during the final... The German brand took over the contract from Nike in 2000. They became the new official supplier of Champions League balls. Adidas Finale is the name...