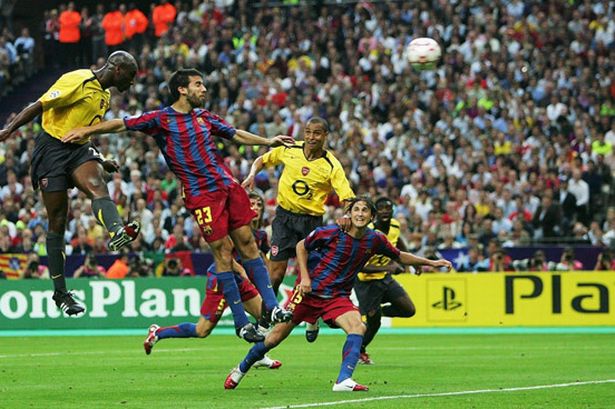 May, a beautiful month…

May is one of the most underrated months. It’s not yet summer, but it’s warm enough for good weekend barbecues. Holidays are around the corner, and you can get a glimpse with a last-minute city-break on the Mediterranean coastline.

For me, it’s perhaps the most beautiful month. My wife was born in May, and we got married the same month.

But why is May so special for football? Because we have the UEFA Champions League Final.

I’m ready for the game

The 2005-2006 edition was special for me. FC Barcelona, one of my favorite teams, was back to the final after 12 years of absence. They were facing Arsenal. What a joy for me as I was to young in 1992 when Barca got its first Champions League title against Sampdoria.

Watched by a crowd of over 79.000 people at Stade de France, FC Barcelona and Arsenal were ready for one of the greatest matches of my youth: The 2006 Champions league final. We gathered together with my younger brother (huge Barca fan, like really huge) and my father who was on the gunners’ side.

Barcelona, a great team with rising stars on the bench

At 21:45 Bucharest time zone, the match was ready for kick-off. Frank Rijkaard lined-up a classic 4-3-3 formation with Oleguer, Rafael Marques, Carles Puyol (c) and Giovanni van Bronckhorst in front of Valdes. Van Bommel and Deco were in the midfield alongside Edmilson who was in front of the defense. Despite returning from an injury, Lionel Messi did not feature in the squad. Therefore, the attack line was formed by Giuly on the right, Ronaldinho on the left and, soon to be man of the match, Samuel Eto’o.

Let’s remember that Xavi and Iniesta were substitutes for the game.

Thierry Henry, the icon and the striker

When you talk about Arsenal, the first thing that comes to my mind is Thierry Henry. He broke many records for Arsenal: most Premier League golden boots (4), Arsenal’s all-time top goal scorer and three times FWA Footballer of the year. These are just a few noteworthy achievements for the gunner’s icon.

As the only true striker for the 2006 final, we can imagine that Arsene Wenger was hoping to get an edge on Barcelona. Arsenal was lining-up a 4-4-1-1 formation:

Barcelona came under pressure early on when Thierry Henry shot straight at Victor Valdes, but it was just a corner. A few minutes later, Thierry Henry tried his luck with his signature shot style from the margin of the goal area – Valdes was there. Quite some pressure from Arsenal and I hoped for the best. Afterall, it was just the beginning.

Here we go, Ronaldinho served Samuel Eto’o with a decisive pass through the entire Arsenal’s defense. There was just Lehman in front of him. I was up of my couch, ready for a goal. But Lehman got other plans. As a last resort, he brought down Samuel Eto’o at the limit of Arsenal’s box.

The referee did not hesitate to send him off and tough times were ahead of Arsenal. Playing in 10 after only 18 minutes is not what one would have hope for. Arsene Wenger had to replace Pires for Manuel Almunia, their substitute goalkeeper.

Ronaldinho missed his chance with a free-kick sent off the target. However, the chances were leaning towards Barcelona as their additional player advantage let them put more pressure on Arsenal.

Arsenal overcame their numerical disadvantage and opened the score in the 37th minute. To my sorrow, Henry executed a free-kick which served Sol Campbell for a headed goal.

1-0 for Arsenal, the score of the first half.My brother went to sleep.

Confidence for the second half

Iniesta was in for the second half and replaced Edmilson who had picked up an injury. After a few minutes, Iniesta had a shot but Almunia was there and saved it. Confidence was back and I was hoping to view Champions League trophy lifted by Barcelona’s players for the first time in my life.

Rijkaard enhanced the attack by substituting the midfielder van Bommel for the striker Henrik Larsson. But it was Arsenal that began to press forward with Henry and Ljungberg trying their chances. Valdes was there.

Now, it was Barca time. At the 76th minute, Iniesta found a narrow breach between Arsenal’s defense line and assisted Samuel Eto’o for the equaliser goal: 1-1 with 15 minutes left to the final whistle.

A victory within the 90 minutes is possible! I was enthusiastic and yelling like a 17-year-old lad.

A few minutes later, Barcelona had another attack. Larsson crossed to Belletti who shot through Almunia’s and scored.

2-1 for Barcelona. The new Champions League trophy was getting closer to the blaugrana squad. As Liverpool won the trophy in 2005 for the fifth time, it entitled them to keep it. Therefore , a new one was needed.

Wenger answered by substituting Hleb with the forward Reyes, but Barcelona got the remaining chances. The matched finished with Barcelona’s victory. I was happy. A dream came true!

I’ve been following Futbol Club Barcelona since Rivaldo era and it was difficult to digest Real Madrid’s glory through the early 2000s. Now, it was my time to celebrate.