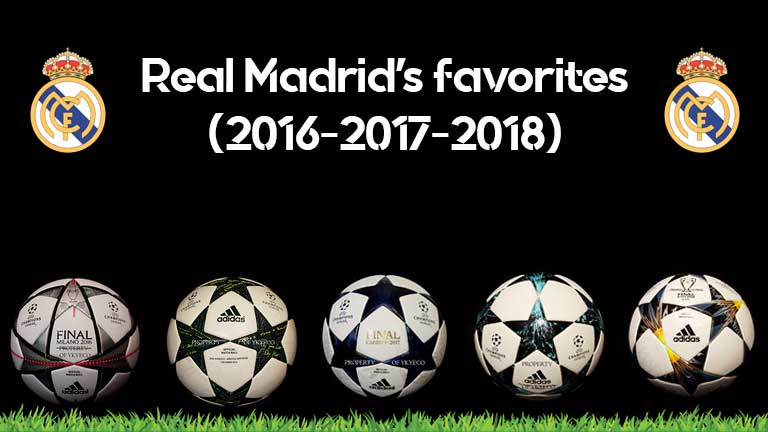 After one-year break when their all-time rivals grabbed the trophy, Real Madrid is back to restore full European dominance. The next 5 balls helped Real Madrid to break all the records by becoming the first European club to win not two, but three in a row Champions League titles.

The famous star-panel ball has a new color: dark green. But what is the real element of novelty? Adidas came with the original idea to reach some of the greatest players in 2016 as Gareth Bale, Toni Kroos, James Rodriguez and ask them:

How do you win your way?

Players responded with quotes that are engraved on the ball:

Some quotes are in English, while others are in French, Italian or Spanish. Adidas kept the exact handwriting of the players who answered to the question.

Original, what do you think? If you like it, don’t forget to check prices and grab one of these balls.

Blue is back to the famous star panel ball. No symbol represents better the Wells than the dragon. So, it’s natural to print a dragon on the Adidas Finale Cardiff. From tail to head, the blue stars are keeping the dragon inside them.

But Real Madrid has other thoughts. Cristiano Ronaldo unleashes the dragon and scores two goals. Even though Mandžukić equalizes for Juve after Ronaldo’s first score, the dragon kept madridista’s side and fired four goals in Buffon’s net.

Another final conceded by the Italian team as their former player, Zinedine Zidane, now the coach of Real Madrid, inspired his players to get the most out of the Adidas Finale Cardiff ball. I say it’s safe to call it the Dragon Ball Z.

Real Madrid is on fire and continues its fantastic performance in the next edition of the Champions League.

Before arriving in Kiev, it’s noteworthy to talk about Adidas Finale 17. The pentagon panels are white, the star panels are black. Nothing more classic so far.

However, inside the stars there is a different story. A series of thunderbolts give the ball a marvelous aggressive look.

In semi-finals, Real Madrid defeats Bayern Munich, while Liverpool surpasses AS Roma. The clash of titans can have only one result: the best will get the crown.

If Real Madrid wants to extend the record of consecutive trophy wins, Liverpool is determined to take back the crown of Europe.

Breaking the records wouldn’t have been possible without the Adidas Finale Kyiv ball. Blue and yellow elements mark an Ukrainian takeover of the design.

Otherwise, the stars got some sharp elements that reminds me of those anime fight effects – Real Madrid fought for the title.

I recommend this ball at least for all Real Madrid’s fans as it marks forever the history of football. You cannot go wrong with an official Champions League ball. FIFA don’t rank them as the best footballs for nothing.